I came across the works of Sh Gopinath Kaviraj ji while looking for the work of Indian scholars on Tantra. It is with a deep sense of being ignorant, I have to admit that I did not know about him and his work till a few months back. He was the author of many books on Tantra, a renowned Sanskrit scholar who was awarded both Padma Bhushan as well as Sahitya academy awards. In 1988, even a postage stamp was issued commemorating him. Gyanganj is one of his famous works that talk about the subtle ashrams that exist on earth and especially in Tibet beyond the Kailash Mansarovar.

I read this book after visiting Vishudhananda Kanan, the Ashram of his Guru Vishudhanand Paramhamsa ji in Varanasi. It felt surreal to read about it immediately after visiting the place, but it made my reading far deeper. I could visualize a few things mentioned in the book.

The book is not simple, nor does it use simple language to explain the concepts that are anyway rarely understood by a common person. It is not written as one single narrative. It goes back and forth in space and time. It tells a bit but conceals a lot.

What remains with me very strongly from this book is the definition of Sidhhabhumi or the Sacred land. I have often thought about this during my travels. I have sat down at the ghats along the sacred rivers and in Tirthas surrounding them and asked this question. The answer provided in the book matches my experience to a large extent. It is the people who have done Sadhana at these places that make them sacred.  Wherever a Siddha sits and meditates, he adds the energy of his Tapasya to that land. I feel validated by what this book tells us about holy places on earth.

It talks about Gyanganj which is a subtle ashram, that is accessed through subtle routes that are beyond the gross world of senses that we live in. It is something that would sound mythical to those who do not believe in Tantra and surreal to those who do. Not many people have experienced it and those who have found it difficult to put it in words. In fact, most of them do not see the need to describe it for others. When people are ready for such places, the doors and the routes to these doors would open up.

I am not sure if this is his first book that one should read. I would know once I read a few more that I picked up from Varanasi this time. It is a book that is not in the realms of what we commonly know. It takes you to another world, where the way things work is not like the world that we see around us. It may look like science fiction but it is not. It may be an inspiration for writing science fiction. You could also say it is at the fringes where the science fiction and non-fiction meet. It is a glimpse into the world of Tantra. It may pull you into the field or it may direct you to never look in this direction.

Gyanganj is one of those books, you would read if you are destined to read. I can only make you aware of its existence.

The Greatest Ode to Lord Ram by Pavan K Varma 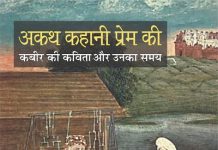 The Bhagavad Gita for Millennials by Bibek Debroy

Gift Economy – Not That Mug or T-Shirt Please!