Ghost Train to the Eastern Star is the second book by the author that I read. And I am tempted to read his other books as well. This book is about his journey from London to Japan. Covering the whole of Asia and back by a trans-Siberian route. He had taken a similar journey more than 30 years ago in the early 70s. There are places in this voyage that he had visited earlier. Some of which he found have not changed at all and some of them had changed beyond recognition. There are parts that he could not visit then and has visited for the first time. And some of the places are visited more for nostalgia than anything else. Most of the journey is done on the train, across countries, continents, cultures, and climates.

The author traveled alone for months, meeting people on the trains, in the restaurants and in the streets. At a  lot of places, the author tries to spend time with the renowned authors of that country. Like he meets Orhan Pamuk in Istanbul, Arthur Clarke in Sri Lanka and Pico Iyer in Japan. The interactions between the authors are interesting. He also wanders around in the streets of a city or a town and observes what is going on around. More often than not, he gets to see the trades of the dark. And he keenly observes and writes about them. He also makes an attempt to talk to his fellow travelers even when he has a language barrier. He describes his food and it’s after effects in details. 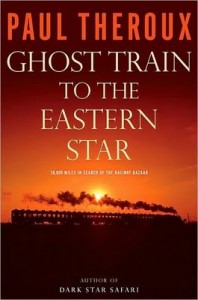 The description of the place, people, references to his past journey and a train travel is what forms a typical chapter in the book. This nearly 500 pages book also has a lot of random things that at times you feel could have been avoided. There is an attempt to see and hence show the place without the layers that usually cover a place. Like in Cambodia he does not talk about the famous temples but about the fields which are used for genocide.

What I loved about the book Ghost Train to the Eastern Star was these small pearls of wisdom that the author keeps giving throughout the book. He himself calls them the Tao of Travel. Having traveled solo in big and small cities, I could relate to them completely. He takes away the glamour of traveling and reveals the insights of a traveler. Sure, someone who travels solo for so long is bound to have an authority to be able to write Tao of travel. Some of which are:

There are others which I prefer not to quote here.

This is the first time I read about the not so great experience of travel through India. The claustrophobia that it gives to its visitors, the recent enthusiasm or rather the over-enthusiasm of people, the lack of trust and just the crowds that unnerve them. At the same time, he also says that India is larger than the world. Most of the times when we talk to people in person, they have only good things to say about your country. In fact, that is what the author does in the book too. It reminds me of the Linda Goodman Sun signs, where you feel elated when you read the chapter on your sign only to read the not so good things about your sign when you read other zodiac signs.

Buy this book – Ghost Train to the Eastern Star On the tracks of ‘The Great Railway Bazaar’ by Paul Theroux at Amazon India.

Naked by Papa CJ – Memoirs of a Comedian