Himalayas – the aura that name generates is nothing compared to what the mountain and its various ranges can do to the ones who dare to explore them. Author Stephen Alter, though American by ethnicity is pretty much a mountain boy having grown up in Mussoorie – looking at the various snow-clad peaks of Himalayas. After a tragic incident that hits him and his wife, he goes on to explore various peaks of Himalayas in an attempt to get that tragedy out of his mind. He also has to finish a climb that he could not because his father passed away while he was on the trek. Becoming a Mountain is the result of all this.

With this backdrop, Stephen Alter relates his rendezvous with four Himalayan peaks. Flag Hill – close to his home in Uttarakhand, Nanda Devi – the most revered and most difficult one. Kailash – where he travels in a group of pilgrims and Bandarpunch – that he fails to finish but gives him the profoundness that he was seeking. His intimate encounters with the mountains as he climbs them, as he longingly looks at the peaks from all sides. And how his eyes catch the flowers, birds, and animals that cross his path on these treks are a delight to read. It almost makes you want to throw the book and take the next road to the Himalayas. His intention to trek alone on these mountains is almost like a jealous lover’s intent who does not want any third person around while he is meeting his beloved.

Throughout the book, he gives you quotes from earlier travelers. Through the books, they have written and through the meetings he had with them. So while you listen to his journey, you also read about the earlier travelers who attempted to climb these peaks. And there are all sorts of stories, myths, legends & anecdotes here that make the narrative so compelling that you just can not put the book down.

The author observes and describes. He is an atheist with a keen interest in rituals and faiths of others. And his ability to be detached while being a part of the group. And simply his quest to know the mountains is amazing. For example his description Raj Jat Yatra – that is Nanda Devi’s procession. It is celebrated every 12 years or his inquiry into the bones found at Roopkund Lake. His description of the two lakes of opposite nature next to each other at Kailash generates a curiosity even when they provide answers. His chapter on walking will force you to get up for that morning or evening walk.

He gives us a peep into a writer’s mind. When he talks about observing deeply and framing narratives while he was still in hospital after his tragic attack. Throughout, he talks about dealing with the pain of this attack, of mountains and the wisdom they bring forth for us. Here are some gems that resonated very well with me:

The book Becoming a Mountain ends up giving you the whole lot of mountain literature that you can read.

Stephen Alter also talks about the people who accompanied him on his various expeditions. The Sherpas, the guides, the porters, the drivers, and others. We never get to hear about these people who actually do the far tougher job than the Mountaineers. Celebrated mountaineers who climb with just their own body to carry and do it for their own pleasure and glory. They do it once and chant about it for the rest of their lives. While these people climb every day to feed their families.

Becoming a Mountain is a layered narrative that educates you, inspires you and still leaves you curious and intrigued. I have decided to order all Stephen Alter books.

You may buy this book – Becoming a Mountain: Himalayan Journeys in search of the Sacred and the Sublime by Stephen Alter at Amazon. 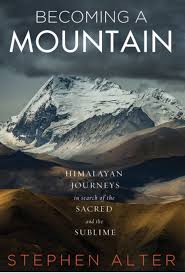