What we cannot know is an incredible book by Oxford Professor Marcus Du Sautoy. He takes you to the edges of different dimensions of science and tells you the limit to which we know. He says the new generations do push the edges to new limits, but eventually, they hit the new edge. Here all we know is ‘What We Cannot Know’. 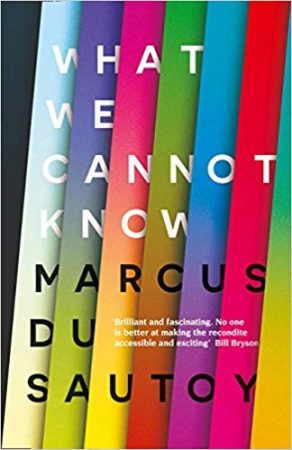 I think this is a must-read book for people who think Science and Religion are pursuing two different things. Both are ultimately trying to find answers to what we do not know. In the process, the two treat ‘What We Cannot Know’ a little differently. A disclaimer though – we are talking about pure science and scientific research, do not confuse it with applied science or technology.

Marcus first takes you to the microscopic world, where he takes you on s scientific exploratory journey leading to the discovery of the smallest known division that we have reached. We do not know if it is all waves or particles or their interchangeability at the core. While reading this, I went back to all the Physics I had read at the university. The author takes from mathematical equations to experiments that take you to particles at sub-atomic levels to bring you to a level where we reach the unknown.

What We Cannot Know: Explorations at the Edge of Knowledge at Amazon

He then takes you to the outer world, the world of planets and galaxies, the world that needs the telescope to get a glimpse of the larger universe we are part of. On this scale we measure distance in terms of time it takes for the light to travel the distance, assuming light travels at a constant speed. The distances are in light years. Here again, we hit the unknown beyond what we can see.

Read more  – A Short History of Nearly Everything by Bill Bryson

Next, he explores the notion of time and how it may not be as linear as we imagine it normally. Linear time may be a convention that we follow for everyday convenience. The Indian concept of time and the concept of multiple lifetimes co-existing simultaneously suddenly makes more sense. Marcus does mention an Indian quote about time, but I think he could have picked up a better one than Rushdie’s satire.

Finally, Marcus takes us to the question of consciousness. He walks us through the various experiments he did on himself to find the switchover between consciousness and being unconscious. His discussion on the state of consciousness took me back to the 4 states of existence – Jagrit or Awakened, Sleeping or Sushupati, Swapan or Dream and Turiya or beyond all the three states. It’s high time someone referred to our ancient texts to understand what our Rishis said. I loved the idea of consciousness being a potential network. It reminded of how I lost my consciousness every time I was given anesthetics.

What was switched off that I could not feel any pain of being operated upon?

Finally, the mathematician in author takes over he takes you through some complex thoughts in Infinity. He mentions Indian seers who first spoke about the heliocentric world and infinity but I wonder when we will start working from where the ancient saints left.

I like the way, Marcus ends the ‘What We Cannot Know’ by saying, we are limited by what we can sense through our sense organs. He also mentions the limits of our knowledge also come from the limits of our languages. Is that not what Indian seers have been saying for thousands of years.

The book is very well written, but it is not an easy book to read. I have a background in Physics and that helped a lot. You really need to get some basic concepts or spend a lot of time understanding them. I am not sure if Marcus had students of science in mind for this book or not, but I would definitely want just about everyone to read this book. It will acquaint you with the process of scientific inquiry.

Some interesting quotes from the book:

If possible, take out time to read this book