Unemployment always makes headlines in India. As a student, it mattered a lot as employability defined the life ahead for most of us. I was fortunate to get my first job through campus placement, so I have never really experienced unemployment. My generation saw a boom in businesses post-liberalization, followed by the rise of startups and the celebration of entrepreneurship. However, the political news never divorced itself from unemployment. A section of society was always looking for jobs, particularly government jobs. 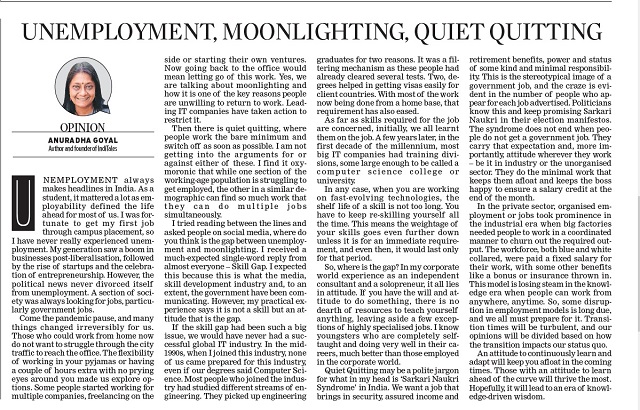 Come to the pandemic pause, many things changed irreversibly for us. Those who could work from home now do not want to struggle through the city traffic to reach the office. The flexibility of working in your pajamas or having a couple of hours extra with no prying eyes around you made us explore options. Some people started working for multiple companies, freelancing on the side, or starting their own ventures. Now going back to the office would mean letting go of this work. Yes, we are talking about moonlighting and how it is one of the key reasons people are unwilling to return to work. Leading IT companies have taken action to restrict it.

Then there is quiet quitting, where people work the bare minimum and switch off as soon as possible. I am not getting into the arguments for or against either of these. I find it oxymoronic that while one section of the working-age population is struggling to get employed, the other in a similar demographic can find so much work that they can do multiple jobs simultaneously.

I tried reading between the lines and asked people on social media, where do you think is the gap between unemployment and moonlighting? Received a much-expected single-word reply from almost everyone – Skill Gap. I expected this because this is what the media, skill development industry, and to an extent, the government have been communicating. However, my practical experience says it is not a skill but an attitude that is the gap.

If the skill gap had been such a big issue, we would have never had a successful global IT industry. In the mid- 1990s, when I joined this industry, none of us came prepared for this industry, even if our degrees said Computer Science. Most people who joined the industry had studied different streams of engineering. They picked up engineering graduates for two reasons. It was a filtering mechanism as these people had already cleared several tests. Two, degrees helped in getting visas easily for client countries. With most of the work now being done from a home base, that requirement has also eased.

As far as skills required for the job are concerned, initially, we all learned them on the job. A few years later, in the first decade of the millennium, most big IT companies had training divisions, some large enough to be called a computer science college or university.

In any case, when you are working on fast-evolving technologies, the shelf life of a skill is not too long. You have to keep re-skilling yourself all the time. This means the weightage of your skills goes even further down unless it is for an immediate requirement, and even then, it would last only for that period.

So, where is the gap? In my corporate world experience, as an independent consultant and a solopreneur, it all lies in attitude. If you have the will and attitude to do something, there is no dearth of resources to teach yourself anything. Leaving aside a few exceptions of highly specialized jobs. I know youngsters who are completely self-taught and doing very well in their careers, much better than those employed in the corporate world.

Quiet Quitting may be a polite jargon for what in my head is ‘Sarkari Naukri Syndrome’ in India. We want a job that brings in security, assured income, and retirement benefits, power and status of some kind, and minimal responsibility. This is the stereotypical image of a government job, and the craze is evident in the number of people who appear for each job advertised. Politicians know this and keep promising Sarkari Naukri in their election manifestos. The syndrome does not end when people do not get a government job. They carry that expectation. More importantly, attitude wherever they work – be it in industry or the unorganized sector. They do the minimal work that keeps them afloat and keeps the boss happy to ensure a salary credit at the end of the month.

In the private sector, organized employment or jobs took prominence in the industrial era when big factories needed people to work in a coordinated manner to churn out the required output. The workforce, both blue and white collared were paid a fixed salary for their work, with some other benefits like a bonus or insurance thrown in. This model is losing steam in the knowledge era when people can work from anywhere, anytime. So, some disruption in employment models is long due. We all must prepare for it. Transition times will be turbulent. Our opinions will be divided based on how the transition impacts our status quo.

An attitude to continuously learn and adapt will keep you afloat in the coming times. Those with an attitude to learn ahead of the curve will thrive the most. Hopefully, it will lead us from unemployment to an era of knowledge-driven wisdom.

First Published in The New Indian Express on 23rd October 2022 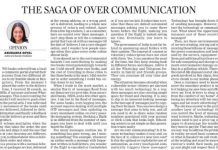