A collection of pieces written by a young Muslim South African blogger of Indian origin for various publications over a period of time have been compiled into this book The Moslems are Coming. Pieces remain loosely bound by the ideas and language of the blogger. Reading between the lines, these are the thoughts of an educated Muslim youth, who are struggling with both what is happening inside the community and how the community is being perceived worldwide. There is no doubt about the fact that Muslim youth today is seen with suspicion irrespective of what they do, represent or think. So the dilemmas are bound to exist within them. Struggle to choose between complying with the stereotype, live with it or to work towards changing it.

Author, having the privilege of education and the blogging platform chooses to do the latter. He criticizes his own community. His article on Burqa-clad women is hilarious. But at the same time, the belongingness makes him protective towards his own people. So he is like an indulgent parent, who would criticize the kid, scold him, beat him. But will not let an outsider utter a word against him.

His articles on South Africa tell me that it is a place not very different from India. His account of trying to file a police complaint about a camera that he lost in crowded place during Fifa world cup reminded me of my own struggle in India to get an FIR filed for my stolen mobile phone. The police in both the countries seem to have a common lineage. His account of the preparation of the country for world cup had resonances with what I saw in New Delhi for Commonwealth games. The same removing of poor and their poverty from the scene of the games. And the sheer display of wealth and corruption in the name of generating employment and creating infrastructure.

His pub-crawl to see how many people are interested in listening to presidential address would have yielded the same results in India. His account of Rwanda and Congo make you feel like going there to see the contrast he has so candidly portrayed. I liked his pieces on Dalai Lama and his changing position with a rising China. The drama of Nobel Prize and the concerns on climate change. His tribute to Fatima Meer is sincere. In fact, the only time he is respectful in the book.

His views on Kashmir, based on his one or two travels to the place are as skewed as they can be. Though I believe it is a subject where having neutral views is almost impossible. His simple assumption is that Kashmiri Pundits moved out of the valley before it became violent. And hence the violence primarily impacted only Muslims who continued to live there. He quotes rare Hindus living in the valley. And his emphasis is on the fact that they are living under the protection of their Muslim brethren. All is well for them. Though they find it impossible to marry their children who are seen with suspicion outside Kashmir.

I wish he had spoken to loads of Kashmiri Pundits who suffer till today. Just because their place of birth was Kashmir even when they live in other parts of India. The cricket bat manufacturing industry in Pahalgaon was a revelation. And will now be on my agenda as and when I visit Kashmir again, a place where I spent a couple of years as a kid.

Recently a lot of my reading has forced me to question? Is it really possible to give up your religious identity and biases that come with it? A lot of so-called liberal atheists may say yes. But if you really observe their behavior, especially in the time of crisis, it would suggest otherwise. Religion is too deep-rooted in us to get out of our system in one generation.

Indians, especially the ones living in South Africa are in the line of fire. For the author obviously does not like them, their way of living, their way of doing business, their wealth and their spices. He even goes on to write on a study that claims that Indian women prefer black men to Indian men. I found that quite funny because there are studies available today that can analyze the data and give you exactly what you want. Reminds me of a saying ’If you beat the data enough, it will succumb to saying what you want it to say’.

The Moslems are Coming book language is abrasive. Not the kind I really appreciate. But probably the kind world is moving towards and the kind the coming generations relate to. What I really appreciated is the author’s wit and his analogies, an uncanny ability to relate things from entirely different worlds. In the last chapter of the book The Moslems are Coming, he talks about himself, an attempt to redeem himself. And I doubt that this piece may have been written especially for the Indian edition.

The Moslems are Coming book reads like a blog. Thoughts of the author in various subjects that touch him either through personal or professional experiences without getting into too much depth. Read it to see the popularly known from a different angle.

You may buy this book – The Moslems are Coming: Encounter with a Desktop Terrorist by Azad Essa at Amazon. 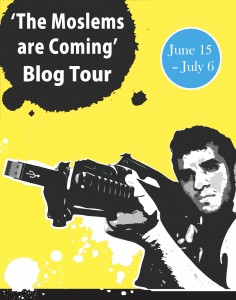