I have read two earlier works of Sudhir, Ecstasy & Mira and the Mahatma. I do not remember much about the first one. But I really liked the second where he kind of demystified the person we call Mahatma. So I looked forward to reading his this book The Crimson Throne on the subject that is currently interesting me the most ‘Delhi and its history’.

The tale covers the decline of Shahjahan and rise of Aurangzeb in the second half of 17th century. This is an era that has been a subject of interest for many writers. Partially because some account is available of this era and the gaps can be filled with your imagination and your beliefs. Sudhir has chosen to tell the tale through the eyes of two Europeans, one an Italian and another a Frenchman. They reached Delhi within a couple of years of each other. And became privy to the happenings at the imperial court. They came to explore the Orient, earn money and go back to their homeland and retire in peace. But they ended up being a part of the events that took place during their stay in the country.

Now the overall story is more or less known to everyone. That Shahjahan wanted his favorite son Dara Shikoh to succeed him on the throne and wanted his third son Aurangzeb to be away from it. But eventually, it was Aurangzeb who had the reins in his hands. Contrasting personalities of both the brothers are also public knowledge. Now what is interesting is that in common view Aurangzeb is Black and Dara is White. What the author has done through this narration is made both of them grey. He has kept the known facts intact but added dimensions to their personalities that made them look more human than the saintly and the ghostly images that they usually project.

Author has skillfully put the two travelers at two ends of the empire, and they give you views not only from an outsider’s perspective but also from the different camps within the empire. There is masala by way of description of harems and about the lives of two pivotal princesses Jahanara and Roshanara. The author gives the stories and their anti-dotes simultaneously and leaves to you to choose which one would you like to believe. yes; There is a vivid description of the lives and times during Shahjahan’s time in Shahjahanabad. The glorious picture that we have painted in our minds of the great times is punctured here and there by the author when he mentions the filth that the common man lives with and the contrasting lifestyles of the emperor and his subjects who actually lived not too far from each other.

Language is exquisite; you may have to refer the dictionary sometimes. The author seems to have mastered the art of weaving fiction on top of factual history. It gets difficult to figure out which part is fiction and which is fact. Author’s imagination and his understanding of the situation skillfully fill the gaps in facts to present a complete story. What is admirable is the fact that he has done all this without being judgmental and without showing any bias towards or against any of the characters mentioned in the book The Crimson Throne.

Read The Crimson Throne if yesteryears of Delhi interest you, if history at the time of the beginning of the decline of Mughal Empire in India interests you and if you want to read a good writing.

Buy this book – The Crimson Throne by Sudhir Kakar at Amazon India.

Read more reviews of the books by Sudhir Kakar:

The Forty Rules of Love by Elif Shafak 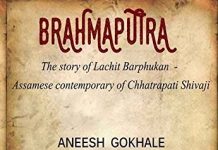