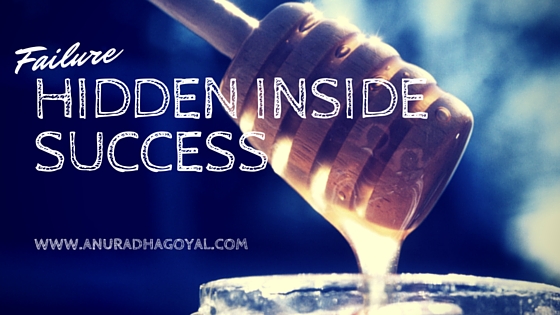 Celebrating failure is a recurring echo that I get in many startups and entrepreneurship forums these days. It has become the new buzz word and everyone is looking for failure stories. It almost feels that people want to chase failure than success. Really? Have we over rated success so far? Has has psychology taken a you turn? Or is it the new age buzz word that we are chasing.

I agree that every success story has failure built into it. We all know that success is built on a series of failures and the will of the person to be not bogged down by those failures. Yes we need to know how the entrepreneur managed his failure, what she learnt from it and how did she maintain her balance in the face of failure.

But, do we not want to learn from people who eventually succeeded and told us that it is ok to fail and learn. A failure is not a full stop as the cliche goes.

Read this book – Why I failed by Shaweta Punj and you would see the brightest shining stars have a pile of failures they are sitting on. This books makes a perfect case of where to go studying failure.

What is understood of Celebrating Failure?

The sense I get of Celebrating Failure is that young men and women can fail and join a cheer brigade that gives them a failure batch with an applause and they can go out and proudly say ‘ I Failed’.

I know the intent may not be to do so, but this is how the youngsters are reading it.

I am not willing accept anyone who is still in 20s and has not tried his hands at whatever they are doing for at least few years as legitimate failure that can be studied.

Failure stories that blame the system, environment, politicians etc etc do not make the cut either as those environmental factors remain the same for every entrepreneur. The successful ones learn to deal with them or find their way through them. If you are facing a road block, you can safely assume that everyone else is too. You can go to the forums and learn how people circumvented these common problems. Using them as excuse for failure is not acceptable.

I hear that there are conferences happening with a theme to celebrate failure.I just hope that invite some successful people to share their failure stories and not just a bunch of failed people trying to go on an ego trip.

Eventually we all want to be successful. Does anyone want to live life as a failure, no matter how celebrated it is? Let’s get that clarity and define our goals.

What we need the most is the support for dealing with failures – those long periods that test our patience and when we are more often than not alone.

Failures are the roadblocks, diversions and course corrections on the path to success, let us not make it a Goal.