Skin in the Game is the path-breaking book by Taleb after The Black Swan and Anti-fragile. I have all the three books, but I never got to sit and read them. I should have read them sequentially, but as luck would have it, Skin in the Game is the first Taleb book I read. Thank God, I started reading him. I am sure others books will soon come out of the shelves and be read.

In Skin In The Game, Taleb talks about what many of us feel and think, but rarely get to put across as well. We also do not make an effort to gather data and anecdotes around out hypothesis. But then, that is what distinguishes these kinds of authors from us.

Taleb introduces the term IYI – Intellectual yet Idiots. I know you can think of so many people who fit this category, especially the experts who appear on TV. His argument through the book is how these experts giving opinions on various world problems from the simplest to the most complex have no real skin in the game. They have nothing to lose if their suggestions fail. It is someone else who suffers. He brings out how far are they from the real life and ground realities. As someone who writes from first-hand experiences, I could not agree more with Taleb.

He also calls these people Interventionists and I could think of so many NGOs who are in the business of fundraising for their own pleasures. 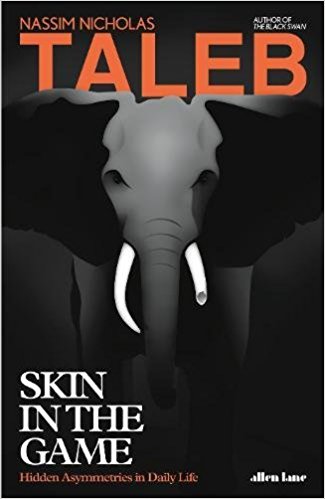 My favorite part of The Skin in the Game is the chapter where Taleb explains how minorities come to dominate the majorities. He explains how few stubborn people can dictate the choices for the majority. I could think of so many examples around me where a small minority wish dictates how things work for everyone. He gives an example of Kosher compliant Lemonade in the USA, which is a requirement of Jews who form no more than half a percent of the population. However, because they would not consume anything that is non-Kosher, 100% of the people end up consuming Kosher complaint lemonade as they have no problem in consuming it.

I also enjoyed reading his take on simplicity and how intellectuals tend to complicate things because they do not have skin in the game and they need to look sophisticated. There is an interesting insight into the behavior of employed people – they are submissive and tend to work towards meeting expectations.

At one place he questions the Pope – why does he go to the doctor before praying when he falls ill? Is he an atheist? Why does he tell others to pray when he does not follow the advice himself?

Some quotes from the book:

The book is written chaotically. It has Books not Chapters, and the first book has 4 prologues, some with due appendixes. The titles of the books or chapters are quirky just as there are experts like Lindy. Lindy by the way in India would be a cab driver. Subtitles of the chapters are difficult to decipher even after you have read the chapter. At places, Taleb uses blocks to demonstrate asymmetry. In a totally unexpected way, the book ends with a poem.

Throughout the book, quotable quotes are in Italics – it made me think if the book formatting is inspired by blogging. These are things that I see more often in blogs than in books.

He keeps referring to INCERTO and his previous books, assuming reader’s familiarity with his earlier works. I must admit I felt lost as and when these references came. Taleb’s tone is bordering on aggressiveness, you can sense the sublime anger beneath his words. He defines his own terminology like Scientism that he calls a sibling of Intellectualism.

Not an easy book to read, but a very important book to read for the times we are living in. Read it to see the world around you through a different lens.

Overall, a very interesting and a highly recommended book to read.

Other Similar Books to Read