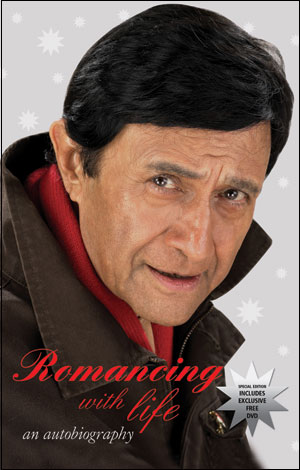 Romancing with Life is the latest addition to my collection of biographies, and autobiographies to be specific. I have always loved Dev Anand for all the melodious songs that have been screened on him. Having grown in the Doordarshan era, have grown on all those black and white numbers, which still keep resonating in the ears. So, when this biography came last year, it was definitely on my list of ‘to be read’ books.

The book Romancing with Life moves in an absolute chronological order. Except at the beginning where Dev Anand remembers his life before he moves to Bombay while on a train from Gurdaspur to Bombay. He briefly talks about his family. And what he felt when he left them to pursue his dreams. Throughout the book, Dev Anand comes across as a constant dreamer. Who lives in his dreams and then wakes up to make those dreams come true. Both in his life and his films. His life is all about films and the woman who walked with him in his journey. Especially the ones which painted the silver screen with him.

At times he met them while being a part of the film and other times, he met them and then went ahead and made films for them. From the early forties to the 21st century what has not changed is the age of the women he fancied and romanced, it was less than twenty then and continues to be the same now.

Keeping in line with his image of evergreen, timeless hero, he does not mention the years anywhere. Though you can make it out by the rough timing of the films he mentions. And the national events that he mentions here and there. But otherwise, he has tried to keep the story more or less timeless. He is a man totally in love with himself; everyone else comes and plays a role in his life and goes. He also comes across as someone who lives only in present, totally at the moment, with the person he is with, feeling the surroundings he is in. And weaving out his future dreams from this present moment. He talks very romantically about all the women he romanced on and off screen.

The autobiography Romancing with Life also brings out the businessman in Dev Anand. You would admire his networking skills and ability to leverage his fan following and Star status as and when required. The fact that he once tried to launch a political party was a revelation to me. But what I admired about him was his ability to very quickly let go of the failures. And move on to the next dream. I was amazed at the care and caution he takes to maintain his image in the minds of his audience. Going to the extent of hiding his small disease that he had to suffer, going all the way to England to get a small operation done. All this so that none of his audience sees him in a diseased state. Something he thinks they cannot imagine, their eternal hero cannot fall down with a disease.

Before he could find himself a job in the film industry, he worked for the military censor office. And had the job of screening letters written by army officers. He probably got a lot of romantic ideas from the letters written by army officers to their wives and girlfriends. He also got the idea of quitting the job from one of the letters, which said ‘just do it’. But wherever he was, and whatever he was doing, he was always a Casanova. Trying to charm people and especially women around him, always believing he is the best. This phase also highlights his ability to draw inspiration from just about anywhere.

Dev Anand’s career spans almost the whole lifetime of Indian film industry. And hence as he talks about himself, his films and his friends and colleagues in the industry. You also get the feel of how this industry has evolved over the ages, how things have changed. Here and there he also mentions his views on the social and political scenarios in the country and the world. Giving a feeling of someone who is very connected to the outside world and its happenings and not just lost in his eccentricities.

Having educated in the British era, he writes in flowery English. You see that wherever I guess the editors have not really changed the text at places you feel that the language of the book could have been a bit better. There is a chapter for each of the films he made under his banner and some of the films he worked in. Though hardbound, the quality of the physical book could have been better along with the cover design. But now having read the book, I realize that the star might not have wanted anything except his picture on the cover.

I would have wanted little more depth in the book Romancing with Life, as there is so much the author has to share. But I guess in the interest of the length of the book, he has not gone into too much detail. And just touched upon what he felt was important to share. He has hardly spoken about the music, which in my opinion is the biggest contributor to his success. The last portion of the book could have been compressed, as he talks about his films which not many people have seen and have starred people whom no one recognizes.

Read the book Romancing with Life to see a man completely in love with himself. A star, who thrived on public adulation, who worked towards it, lived amongst the adulation poured on him from all directions. And continued to seek more and more of it. An eternal optimist, who looks back at his life as if everything was picture perfect including the heartaches that he went through.

Thanks, Deepa, for this lovely birthday gift.

Buy this book – Romancing with Life by Dev Anand at Amazon India.