Standing in the market, Kabir wishes everyone well 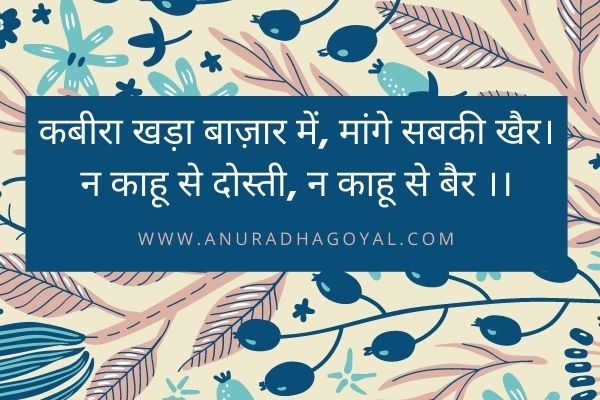 This is a rather popular Sakhi of Kabir. Anyone who knows even a bit about Kabir knows this Sakhi. On the face of it, it is very simple to understand.

Kabir is standing in the marketplace, where he would go often to sell his weaves, for he worked as a weaver for his living.  He wishes well for everyone – is that not what all good human beings do, wish well for everyone.

In the second line though, we often miss the first part and focus on the second where he says he feels no animosity towards anyone. That is again easy to understand. All our moral values tell us not to hate anyone. Whether we practice or not is another point though.

What we often miss in this Sakhi is the fact that Kabir says he is not even friends with anyone. Why should one not be friends with anyone or everyone for that matter? This is where we create Dwait or dualism. The moment I say one is my friend, I am saying I see him differently than others. I see him as mine and others as not mine. It creates the division of my world into mine and no mine. We never say – just friend, we say, my friend, it is a relationship. It is a relationship that creates a divide in your worldview as much as being an enemy does.

Having no friends and no enemy means, you have the perfect Samatava or equanimity. You see everyone the same way. Each human being and even other being mean the same for you.

Now, let us return to the first line. Kabir is standing in the marketplace, where the world comes to trade. It is a place where all kinds of people come to do business, they meet and exchange stories. Kabir is not sitting in isolation, away from the world, where giving up your affections would probably be easier. He is very much a part of this world. Kabir is interacting with the world, buying his yarn and selling his fabric, probably negotiating the best price. He is not giving up on the world. He is being a saint while living in the world as a householder, earning his own living, taking care of his family.

Overall, this Kabir Sakhi tells us that while staying in the world, engaging with the world, one can be detached in a way that you connect with everyone in the same way. Like Bhagwad Gita says – Detached without being indifferent. 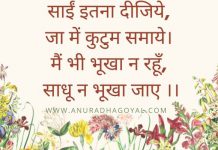