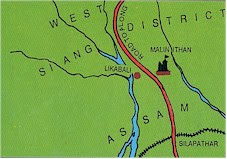 I picked up this small book Malinithan on this ancient temple in West Siang district of Arunachal Pradesh from the museum in Bomdila. It is in this museum that I first heard of this temple, which is actually located in the eastern part of the state and maybe the east most ancient temple in the country. I read a bit about it in the museum and wanted to know how this part of the country was connected through art, architecture, and style with the rest of the country in ancient and medieval times.

J C Dutta is an archeologist. And hence this booklet Malinithan is more like a research report on an excavation site. To complete it, he has given the historical and mythological context of the temple and its surroundings. The temple is supposed to be the associated with Krishna and Rukmini who some legends say were married here. And some say visited this spot after they were married. Temple actually belongs to Parvati and hence Shiva. The story is that when Krishna and Rukmini came here, Parvati served them as a Malin (a gardener or gardener’s wife). And hence the name of the temple. Some accounts also think of it as a Shakti Peetha, as is with most Shakti temples. This may have been a seat of Tantrik worships too. 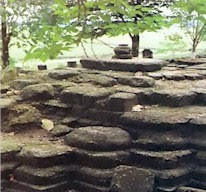 The style and sculpture place the temple to have been built around 11-12th century, probably by the Palas who ruled the Kamrupa region. It would have been built at the banks of a tributary of Brahmaputra. The material used in the temple is not local. And must have been brought from Utkal or present-day Odisha, along with master artisans from other places. Author has explained the iconography of each and every piece of sculpture found in the site along with its picture. He also gives an interesting explanation of the erotica on the external walls of the temple like most of the temples of that era. He says the temples were often destructed by the lightning that is nothing but Indra’s weapon. So these images on the walls recreate the Indra’s heaven and lightning does not strike the temples. Interesting!

He finishes the book by talking about the current status of the temple, which has been re-built recently and the festivals that are celebrated here.

Reading this book Malinithan suddenly brought this place much closer to the rest of India in my mind. The same temple layout, the same sculptors, same iconography and more or less same level of destruction. And then the reconstruction of the temple make it a part of mystical history. Now I need to visit this temple and the region.