Heath brothers have tried to explore what makes few ideas stick. And present an acronym like a formula for making your ideas stick. After reading the book Made to Stick, I am not sure if they are talking about ideas that are creative? Or they are talking about how to sell your ideas. They provide the following framework, called SUCCESS to make sure that the idea sticks:

Simple: Find the core idea or the lead of the story and present it with full force. Do not let the core message get buried in a long story. Or an under the weight of information overload.

Unexpected: Take your audience by surprise, have an unexpected twist in your story and do not let them predict what you are going to say next. Now haven’t we heard that before?

Concrete: Do not talk in abstract language, which the authors say is for the experts. For the novice or the layperson, you have to talk in concrete words. Pick examples that can drive your point. They quote Mother Teresa saying that if she looks at masses, she can do anything, but when she looks at one, she acts. They advocate not talking in numbers. And as and when you do talk in numbers, talk about numbers that the audience can comprehend and not the abstract data.

Story: People remember stories better than they remember names and data. Storytelling is an art which many have tried to dissect and convert it into a formula. But in my opinion, it remains an art which is an inborn gift and is acquired by some over a period of time. Yes, stories do have an impact. If this book succeeds in making its own ideas stick? I am not sure if the answer is ‘Yes’. It is one those American books that appear every year, somehow manage to get rave reviews, can be classified bestsellers. But if they really say something new is a question. There may be few small insights here and there that you may use. But in general, most of the things it says is what you probably know. 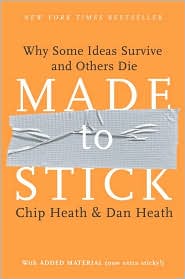 One interesting way to put storytelling from the book: Story’s power is twofold: It provides both simulation (Knowledge about how to act) and inspiration (motivation to act). The credible idea makes people believe, the emotional idea makes people care and right stories make people act.

They keep repeating the ‘Curse of Knowledge’ throughout the book Made to Stick. Which is something that has not become a mainstream thought process as yet? But with the abundant flow of knowledge from all directions and all kinds of sources, both the idea generator and the audience get lost and create a gap in their understanding. I think this thought process will take roots and some people will work on researching how to combat this new found curse.

I think you can skip this book Made to Stick.

You may buy this book – Made to Stick Why Some Ideas Survive and Others Die by Chip and Dan Heath at Amazon India.