This article Making use of the Language Landscape Diversity by Anuradha Goyal, author and founder of IndiTales.com was first published by the New Indian Express newspaper on December 24, 2020.

Four years ago, while looking at search analytics of our travel blog, we found that people were searching Hindi terms. That too in Devanagari, but they were obviously landing on an English page. This led us to launch our Hindi Travel blog. Which soon garnered a compact but loyal readership without much marketing. The marketing spends on the Hindi media and I assume other Indian languages stay negligible.

As the content is being translated and published in different languages around the country and the world, it opens up translation as a career opportunity for a large number of people. Perfect for those who want to live a flexible life with a laptop as an office. This in turn is an opportunity for trainers who train people in different languages. Either in online or offline classrooms or through mobile apps. I am reminded of my visit to Mattur. One of the rare Sanskrit speaking villages in Karnataka. While I was amazed to hear the fluent conversational Sanskrit, I was equally delighted to see them using basic technology to teach Sanskrit around the world.

The translation may seem like a freelancer’s domain. But there are big projects like the Murty Classical Library of India that is translating ancient Indian classics into English. To make them available to the world. Given the number of manuscripts across the country, the world classics that we need to read in India, there is an opportunity for many more such projects.

Mumbai-based Indus through its App Bazaar is creating India’s own version of Playstore to host mobile applications by leveraging the language advantage. It offers over four lakh apps in twelve Indian languages. Currently, they are the default App Store on about a hundred million Samsung devices in India. They offer localization support to any developer who wants to create an Indian language mobile app. Or port any existing apps in Indian languages along with helping them with the distribution. A great move that would help local language users. As well as open up opportunities for those who want to build local and hyperlocal apps in local languages. Indus’s technical support though still remains global. Be it their device partners Samsung or their Cloud partners Amazon web services. The company is yet to be profitable. But their pioneering investment in languages will hopefully soon take them there.

Technocrats working on Natural language processing (NLP) have been trying to bridge the gap between human and machine learning. If you have ever wondered how your mobile phone creates your version of dictionary on your device or how it converts text to speech, taking care of the nuances of your pronunciation, or how Gmail suggests possible replies for your emails, its NLP at work. Machine translation is part of its portfolio. It is an area that has seen limited yet extremely usable success. You can not yet trust the machine translations to have a literary quality. But for all practical purposes, they work. Google just launched its made in India, free and open-source machine learning tool for Indian languages called Multilingual Representations for Indian Languages or MuRIL for researchers, students, and start-ups who want to create local language technologies.

IBM’s Watson Discovery – an Artificial intelligence-based discovery tool now supports the Hindi language. It is one of the ten languages that they support worldwide. Simply put, this means that all the content available in these supported languages can now be searched for and translated to the language searched in. The impact of this is multi-dimensional. English would cease to be a necessary condition for both employers as well as employees. Sharpening the focus on the core competencies and widening the net at both ends. It is the best time to be working in the language landscape, be it using languages or building core technologies, or enabling applications.

A Gujarati reader once reported that he translates my posts using Google translate and gets confused, urging me to write in Gujarati. It told me about the need or market for local languages, the adaptation of the latest technology in remote areas, and the knowledge and hence opportunities gap that a better solution can plug for the user.

For the longest time, we have seen digital nomads traveling the world teaching spoken English in non-English speaking regions of the world. Would we see people traveling around to teach yoga or music speaking their own language and using technology to communicate?

Edited for this online publication. 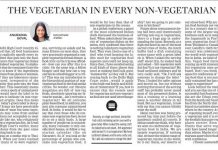 The Vegetarian In Every Non-Vegetarian

Ayodhya – An Opportunity for Indic Model of Tourism