Writing a biography is always tricky. It gets very complex when you are writing about a known person who lived a couple of centuries back. There is a public image and public perception since the person lived not too far in the past. And some of his legacies continue to live to date. But at the same time, there is not much material evidence present to draw a full sketch. In the case of Sir Jamsetjee Jejeebhoy, his legacies like JJ school of arts and various other charities continue to live. There is a lot of evidence of his professional life that he himself left behind. But still, there are missing pieces like details of his family and social life.

Author Jesse S Palsetia has tried to recreate a very realistic sketch of the life of Jamsetjee Jejeebhoy. And through him the society of 19th CE Bombay. He traces the journey of Parsis from Gujarat to Bombay, as the city was just setting up. And their journey to become the key traders of India trading in anything from silk to opium. The 19th CE links with China are interesting. And even more interesting is the fact that businessmen of all eras have always been as global as possible.

Now what is interesting about the story of Jamsetjee Jejeebhoy is his success in business. Followed by his conscious efforts to create a place for himself in the Bombay society. He engaged in various charities for both Parsis and non-Parsis. Took leadership positions in Parsi community organizations like Parsi Panchayats, engaged in building fire temples and Dakhmas. While philanthropy may have been one of the motives for him, his real motive was to get a title from the then British government, which he managed to get. In fact, he not only got the title but also managed to get it hereditary. So that it would pass on to his family. And I doubt it may have more to do with his elder son who was playing a major role in getting his position elevated in Bombay society.

Being a book with an academic approach, the author has done a very neutral job of analyzing the information about Jejeebhoy. He does not get swayed by the public image. But rather goes by records both personal and public. And shares his own insights about the material. He gives a very realistic picture of the Bombay of 19th CE. Of the roles, the Sethias or the traders played in making Bombay. And most importantly the links between British Government and the rich elite of Bombay. It is interesting to see how the Sethias aligned themselves to British Government when they realized they would be in power for foreseeable future. Is this not how businesses survive and thrive in every era?

As an academic book, it is not easy to read or shall I say entertaining to read. There are lots of repetitions and that can get boring. But having said that it is a perfectly readable book, especially if the history of Indian business or Parsi businessmen interests you. At less than 200 pages, it does not take too much time to read. It also gives you insight into how the awards/rewards and titles are lobbied for and how they do not really come as a genuine recognition of some work.

Personally, for me, this verified a story that I heard about Mahim Causeway in Mumbai that was built by Avabai – wife of Jamsetjee Jejeebhoy.

You may buy this book – Jamsetjee Jejeebhoy of Bombay: Partnership and Public Culture in Empire by Jesse S Palsetia at Amazon. 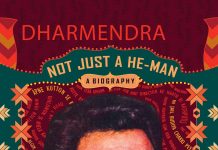 Dharmendra – A Biography by Rajiv Vijayakar

The Monk Who Became Chief Minister by Shantanu Gupta