Why has India not produced a Google or Twitter or Amazon? It is a question that has been asked a million times, with no convincing answer ever found. Well, all the big digital product companies primarily flourished in the West, which had the right breeding conditions for them. The rest of the world became a consumer and beneficiaries of these technologies.

India’s first defining moment in its new-age technology journey came around the turn of the millennium when we helped the world deal with the infamous Y2K problem. The next moment came about a decade later when the first-generation digital entrepreneurs started building solutions for local problems. The third moment is now when Unicorn is the buzzword. However, the question stayed where it was through this evolution cycle. We are a civilization that thrives on questioning while waiting for the answer to appear before us. The time for the answer is now.

India’s sweet spot is its leadership in public technology. No one has designed and used technology for the larger good of society as we have—at the moment within the boundaries of India but it is not limited to the country. It began with a biometric-based digital identity and a unique identification number called Aadhaar by the Unique Identification Authority of India. More than 129 crore UIDs have been generated in a decade till March 2021. This, when used to link identities across the bank accounts and mobile phones, has enabled the direct dissemination of public benefits. It is not without its hiccups, but it is a database that allows you to use it as the time and circumstances demand.

An example of the circumstantial use of UID is the CoWIN portal-Aarogya Setu App that used the Aadhaar database to vaccinate a large population, not just once but twice in a span of a few months. Its digital vaccination certificate is way ahead of the rest of the world. Micro ATMs are another case in point; they primarily use Aadhaar data to enable transactions using a small machine, which has now outnumbered the regular ATMs.

As cashless payments become our default mode for transactions, the ATMs may find a place in the tech museums (Bengaluru should plan one for all the redundant technologies). This brings us to another public technology from India famous for its speed of adoption across the board, thanks to widespread mobile phone adoption and availability of affordable data—Unified Payments Interface or UPI. We use different apps like BHIM, Google Pay or PayTM to make payments to people or merchants. Scannable QR codes can be seen used by everyone and everywhere, from pani puri sellers to hospital billing counters. What makes UPI unique is the zero cost for the users. Remember, we paid a transaction fee to enablers like credit card companies, limiting the number of transactions and keeping the value above certain spending limits. This game-changer has enabled the person at the lowest end of the pyramid to do real-time digital transactions by converting their mobile phone into a virtual debit card that works across banks.

The global domino effect shows when Google pitches for FedNow—a proposed inter-bank settlement system in the US. It has cited its extensive experience with the UPI of the National Payments Corporation of India (NPCI) and shared learnings from our country that the US should emulate—including no fee for small low-value transactions.

The Open Network Digital Commerce (ONDC) is soon to be launched by the commerce and industry ministry. It is an open digital protocol that would allow the exchange of products and services. Just like UPI, it will allow people to sell through any ONDC-compatible app or platform using its standard protocols for cataloging, inventory management, and order-cycle processing. It will create a level playing field in digital commerce for small and big players by giving them the power of discoverability while bringing down the monopolies of the big corporations.

In the pipeline are the Open Credit Enablement Network (OCEN) which would facilitate easy credit flow between lenders and borrowers, and Data Empowerment and Protection Architecture (DEPA), an agile consent management framework that aims to empower individuals by giving them control of their private data and how they share it with third parties.

Philosophically speaking, this public technology leadership embodies the Indian philosophy of Sarvajan hitaay, sarvajan sukhay—for the benefit and good of everyone—while treating the world as one family in the spirit of Vasudhaiva kutumbakam. Whether these protocols are new-age carriers of philosophy or rooted in them depends on which lens you view them from.

So next time when you face the question asked in the beginning, talk about the India stack comprising Aadhaar, UPI, ONDC, OCEN and DEPA, and our contribution to the world of public technology rooted in the nation’s culture.

First Published in The New Indian Express on 04 Jun 2022. 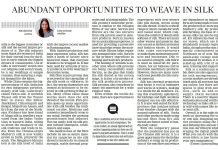 Abundant opportunities in silk to weave

Decoding the logic in the logistics sector 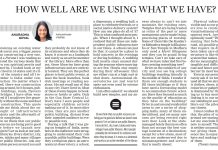 How well are we using what we have?

Abundant opportunities in silk to weave

My Experiments with Gandhi Marg by Dr. Virendra Singh

Decoding the logic in the logistics sector