Gurcharan Das can be seen as the chronicler of current times from a socio-economic-political standpoint. He has been documenting the changing times in India in post-liberalization era. After having spent his time at the helm of the business, he has studied Mahabharata extensively. And has been exploring the concept of Dharma as prescribed in the epic. And as practiced by the epic hero Yudhishtra. Post his study he has been trying to say that the answers to India’s problem lie in the word ‘Dharma’. He loves to explain the various types of Dharma like Sadharan Dharma, Swadharma, Raj Dharma etc.

He goes to the extent to say that if every country had a word to define itself – for India the word would be Dharma. And he essentially wants Dharma to be the driving force for the country. Especially the conduct of its people and its administrators. He believes that if everyone works towards upholding the dharma, we will have a strong society and a strong state.

In this book India Grows at Night, he makes a case for India having a strong society and a weak state. He gives the historical references to say that a strong society has been a part of our DNA. And it is not a new thing really. He quotes Andre Beteille ‘India’s society consisted of diverse cultural communities that shared a sense of brotherhood within themselves but existed distinctly apart in their relationship to each other. Yet they lived harmoniously in a non-antagonistic stratum’. He contrasts it with China. Where he thinks the state had always been strong while society always been weak.

He compares the two scenarios. And makes a case for an ideal strong society and strong state. A perfect equilibrium which I am not too sure if it exists anywhere in the world. Or if it existed at any point in time in history too. He gives the example of Gurgaon which has grown despite no contribution by the state. But having lived in Gurgaon twice, once when it was still in the making and once when it had already achieved its Millennium city tag, I can tell you it is a city that glitters but has too many problems. It consumes too much to be sustainable.

A point that I wish he is able to convey to the political parties of India is that they should start catering to the aspirations of the youth. Rather than all the time talking about the miseries of people, playing people against one another. He advocates the politics of opportunity. Instead of politics of what has been denied to you. I am not sure if many political parties will be willing to listen to him. Or even explore the idea as they deal with their own age-old conditionings. But this is definitely an idea worth exploring.

He talks about the increasing percentage of the middle class in Indian population. And hence it becomes important in the larger scheme of things. He mentions instances where the middle class is not taking things lying down. And is willing to fight for their rights. This came up very clearly in Anna Hazare movement. He also highlights what we all know that where the Indian state fails is the implementation of laws or upholding of laws. How the rich and powerful are comfortably able to bend the laws in their favor.

He mentions a comparison of Middle Eastern countries with Indian democracy. To highlight what we tend to take for granted in India. He tries to show what we tend to miss in the envelope of corruption. But does he have an antidote for corruption – not really? He has opinions on the current movements against corruption. But no real great idea on how to handle corruption. He sites few ideas that could have worked provided the policymakers had a will to make it work  – like our whole legal system.

India Grows at Night book is good is certain parts but is repetitive in most. If you have heard him speak or watched his videos online you know virtually know what he is trying to say in the book. While I agree with his Dharma concept, I need some ideas on how to make it relevant for the Indian public and more importantly administrators.

Read India Grows at Night if you are a Gurcharan Das fan, otherwise, just hear him speak online about his books and you save your precious time.

You may buy this book – India Grows at Night: A Liberal Case for a Strong State at Amazon. 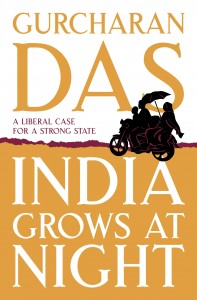 Naked by Papa CJ – Memoirs of a Comedian