How I Became a Tree by Sumana Roy takes you into the world of trees. Autobiographical nonfiction, where the author talks about her obsession with trees. And her innate desire to be a tree. She has nurtured this desire through various means – by staying close to trees at home and in nearby jungles. By studying all possible literature on trees and by traveling to meet famous trees. It is a unique journey that would make you look at the trees differently, more humanely if I may say, every time you step out of the home. You will think of tree being a live entity and as a natural response be more polite to it.

Sumana Roy talks about the tree as it exists in her head. How she related to them, how she tries to understand their lives. Sometimes, she just goes and spends some time in the forest, sometimes she tries to sit under a tree, and sometimes she goes and records the sounds various trees make in response to say – the wind.

She takes the reader through trees in literature. Right from O Henry’s The Last Leaf to the folk tales of Bengal where the trees can curse people to die. She often visits and re-visits Shanti Niketan as she finds a sense of siblinghood in both Tagore and Nandlal Bose. And She talks in detail about their love for trees and how it dominates the houses of Tagore and works of Bose. She travels to Darjeeling to see the botanist Jagdish Chandra Bose’s house. Apparently, he was interested in the secret life of trees. In this chapter, I discovered the ‘Praying Palm Tree’ of Faridpore that bows in the fashion of prostrating every evening. I learned about the Telegraph plant – whose pulsation goes on perpetually like a human heart.

He even had a name for the script of plants – Torulipi. Elsewhere in the book, I learned that Dendrophile is a cult of people who feel changed or converted by spending time in the forest. It even has a Japanese equivalent – Shirin-Yoku’.

She talks about sculptures of trees and how to capture trees using the camera. Basically, she touches every possible aspect of a tree as it has been seen by scholars, artists, poets, and storytellers.

There is a lovely feature on the author’s fascination with the shadows of the trees. She goes on to the extent of doing x-rays of a tree trunk. This should give you an idea of the extent of her obsession.

Sumana Roy talks about the fascination of childless women with trees. She brings out a whole lot of them from literature and cinema who treat trees or plants like their children. They worry about who will take care of them when they are gone just like the author worries herself. I see a resonance in what I see many childless women I know do, A lot of them indulge in nurturing plants. Even J C Bose and his wife did not have children. And neither did Sister Nivedita who took over their home. I wondered why I have not adopted any plants as my children – is the nurturing gene in me is missing.

There is an exploration of the use of gardens for adultery, of getting lost in the forest, of connection between forest life and creativity. She brings out known but never thought about things like – there is no concept of hygiene in forests – where dirt and cleanliness are the same. It would make you think about why you like going to the forest and ideas why you should.

Towards the end of the book is her exploration of Buddha and his relationship with trees. This is a very interesting part as Sumana Roy traces the journey of Buddha with trees – he was even born as his mother held the branch of an Ashoka tree at Lumbini. In fact, even though he was a prince, he was born in a forest. The biggest point she made me think about was – the use of animal motifs by Hindu Gods and Goddesses mostly as their vehicles. And the use of plant motifs by Buddha – especially the Bodhi tree under which he attained enlightenment. The author, of course, makes a trip to Bodh Gaya and is disillusioned to see the famous tree hidden under the cover of its own safety.

On the death of trees, she makes us think why we mourn the death of an ancient or old tree while not at the death of a grass that lives just a few days. I would say – the length of time adds depth to the relationship may be.

Overall, I loved reading this book. It takes you away from the chaos of your everyday life. And makes you think about the basic relationship we share with nature and its elements like trees. It brings out a certain simplicity and sensitivity that is there in all of us – but it gets lost in our urge to live the life we have chosen to live.

On a lighter note, I want to know what the author thinks of trees used to print the book.

This is one of those books that would become a piece of revered literature as it ages.

You may buy this book How I Became a Tree by Sumana Roy at Amazon. 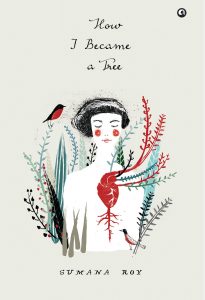 The Greatest Ode to Lord Ram by Pavan K Varma