Not many of us have heard the name Gujarmal Modi unless someone in the family had a connection with the businessman. Those of us who have lived in Delhi and Western UP, know of Modinagar which was not just established by him but is also named after him. I remember it more for the mandatory Jain Shikanji stop during my Delhi – Meerut trips. 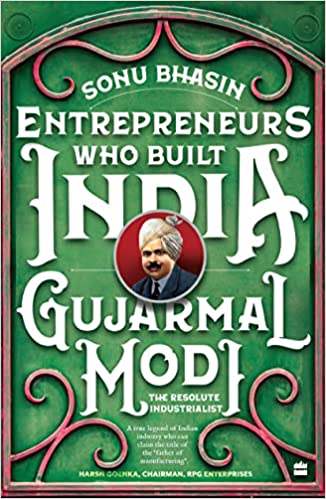 The biography of Gyjarmal Modi is part of a series called ‘Entrepreneurs Who Built India’ by Sonu Bhasin. I think it is a great idea to write this series on lesser-known but important businessmen of India, especially those who negotiated the tough times post-independence and during license raj.

As a personality, Gujarmal Modi comes across as gutsy, quirky, and determined. He wanted to set up his own township and he did it, despite his family and the then king of Patiala not wanting him to do that. Many incidents of him solving complex problems in a dramatic way seem too simplified. However, I assume that the details may be available as anecdotes only to the author. They almost feel like a scene from a film, complete with a pious inspiring mother.

The book traces the journey of the Modi family from Haryana to Patiala to Modinagar. Like most businesses in those days, the Modi family owned the business with Gujarmal Modi at the helm of affairs. You see a journey of sensing opportunities and going after them with complete determination. They came in the form of sugar mills, soaps, dalda ghee, textiles and many things that a young independent nation needed.

You also see a man deeply rooted in religion and tradition. The author has not done justice to the cultural aspects of the family and the protagonist. Maybe her own understanding of how value systems can impact even big business decisions needs to grow. For example, the fact that Modi refused to use beef oil in soaps he manufactured, not only because he did not want to consume beef himself but also wanted to make the alternative available to the vast majority who would not want to use a product with beef in it. The family’s evening Arti together, their building of large temples in their townships and their living a simple life despite all the wealth at their disposal is something that should inspire the new generation entrepreneurs. I am not sure how true are the stories about Gujarmal Modi finding solutions to life and business problems in his dreams, but if he did, it speaks of his spiritual Siddhis, where he could meditate on a problem and come up with solutions. Some of the solutions seem to have come magically to him.

You also get to see how the family businesses lose steam when the key driver in the family passes away. Clear division of businesses is not easy, definitely not of not done in the lifetime of the first-generation entrepreneur. Family businesses come with many advantages and easy to do adjustments but they also have their known problems. When I wrote about the Hero Story, it stood out that the family has managed to divide the business amicably and with no public conflicts.

The book begins by telling you that Lalit Modi of IPL fame is the grandson of Gujarmal Modi. Incidentally, despite an incredible journey as an industrialist, today’s generation knows him as grandfather of his fugitive grandson. This makes books like this absolutely essential. In writing the political and social histories, we have forgotten the industrialist who helped India be self-reliant, generated employment and created townships. While a few big industrialists have been written about, most are still waiting for their stories to be told.

I am definitely looking forward to the next book in the series.

13 Lessons from The Making of Hero by Sunil Munjal

Everything Started as Nothing by Bhaskar Majumdar