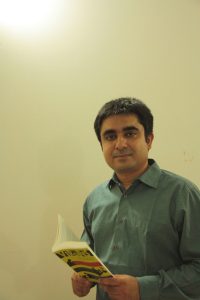 I had earlier reviewed Siddharth Tripathi’s book The Virgins and here is he talking about the same.

Interview with Siddharth Tripathi on Banaras and his book.

Tell us something about yourself. Where did you grow up, what did you study and what do you do for a living?

I grew up in Banaras. I’m a B.E from NIT Trichy. And an MBA from MDI, Gurgaon. I currently live in Gurgaon and work as a consultant for a business advisory firm.

What is your relationship with Varanasi, a city that is as much a part of your story as other characters?

Banaras is an eclectic mix of myth, legend, history, and religion. And to add to that is the sheer diversity of its inhabitants. The city accepts, without any prejudice, anyone who wishes to call it home. As a teenager, I was surrounded by very interesting, colorful people. I was witness to funny, often bizarre events. I left the city in the late 1990s. But the city, its people and their stories never left me.

Today I relate to Banaras with a sense of nostalgia and regret. Nostalgia because my memories of it have become hazy and pleasant like old sepia toned family photographs. Regret because there is so much more to discover about the city but I’m not able to find enough time to do that.

Could this story be based in any other city?

At one level, it is a small town story and it can happen anywhere. However, many of the characters are unique to the city. For e.g., Manglu and Paglu Bhaiyya who spend their evenings at the Ghats or Diane (the tourist) who’s here to seek a spiritual life.

Where is the source of those rustic teenager characters in your story?

The novel is an attempt to capture all the different people I knew while growing up into ten-fifteen people who could inhabit the book. A story has its limitations – it has to create a microcosm to be coherent and readable.

Why did you choose to write adolescents and their minds?

This is a story I always wanted to write because I thought it needed to be told. It just happens to be a story about adolescents.

Why are women so conspicuously missing from the main narrative, was it conscious or it was not their story?

Women have a distinct and meaningful presence in the story. Sushma (Pinku’s love interest), Diane (the American who is the object of Bhandu’s infatuation), Bhandu’s mother, Sunita (the chaiwallah’s daughter). But the story is mainly about the three boys. And other characters are there to influence that main narrative.

My impression of the story is the commonality in the problems of teenagers across different strata’s of society – can you talk about it?

The novel describes six pivotal months in the lives of three people. That’s how it was intended to be written. It does not attempt to enlighten the reader on the teenage psyche.

However, after writing the first draft, I did realize that there was a common link that all three characters share. They all have a ‘father complex’. Although the emotional, social and familial context and the way this complex plays out are different for the three characters. For example for Pinku his drunkard father is disgusting. But subconsciously he’s also someone he tries to emulate by trying to run away from home just like his father did. For Bhandu his father’s unfulfilled ambitions transmute into his own aspirations. I have left a lot of it for the reader to decipher if he/she wants to – or the reader can choose to treat this book as standard Indian commercial fiction fit to be consumed and forgotten about.

You make a folk tale reference to parrot that is linked to owner’s life in your characters – talk about the genesis of it.

It is a very well-known folk tale – how the monster was indestructible till the time his pet parrot was killed. I used it in the novel for a character named Chacchu who is a villain and a drunkard. Chacchu loves Sunita (a chaiwallah’s daughter). In the story, she’s symbolic of the monster’s (Chacchu’s) parrot.

I have also used a lot of Shakespeare and 60s rock references in the book. The intention was to explore this seemingly odd juxtaposition. And see how it fits into the narrative. I think it worked well.

Do you have plans to get the book translated into Hindi or any other Indian language? If yes, please share the plans, if not, please start thinking about it.

Yes. I do. Will let you know once I finalize on a publisher.

Siddharth Tripathi, are you working on another book? If yes, please tell us a few things about it.